Digitale Transformation > Allgemein > Do you see the mouse in the image? – Quality time is only for quality people! 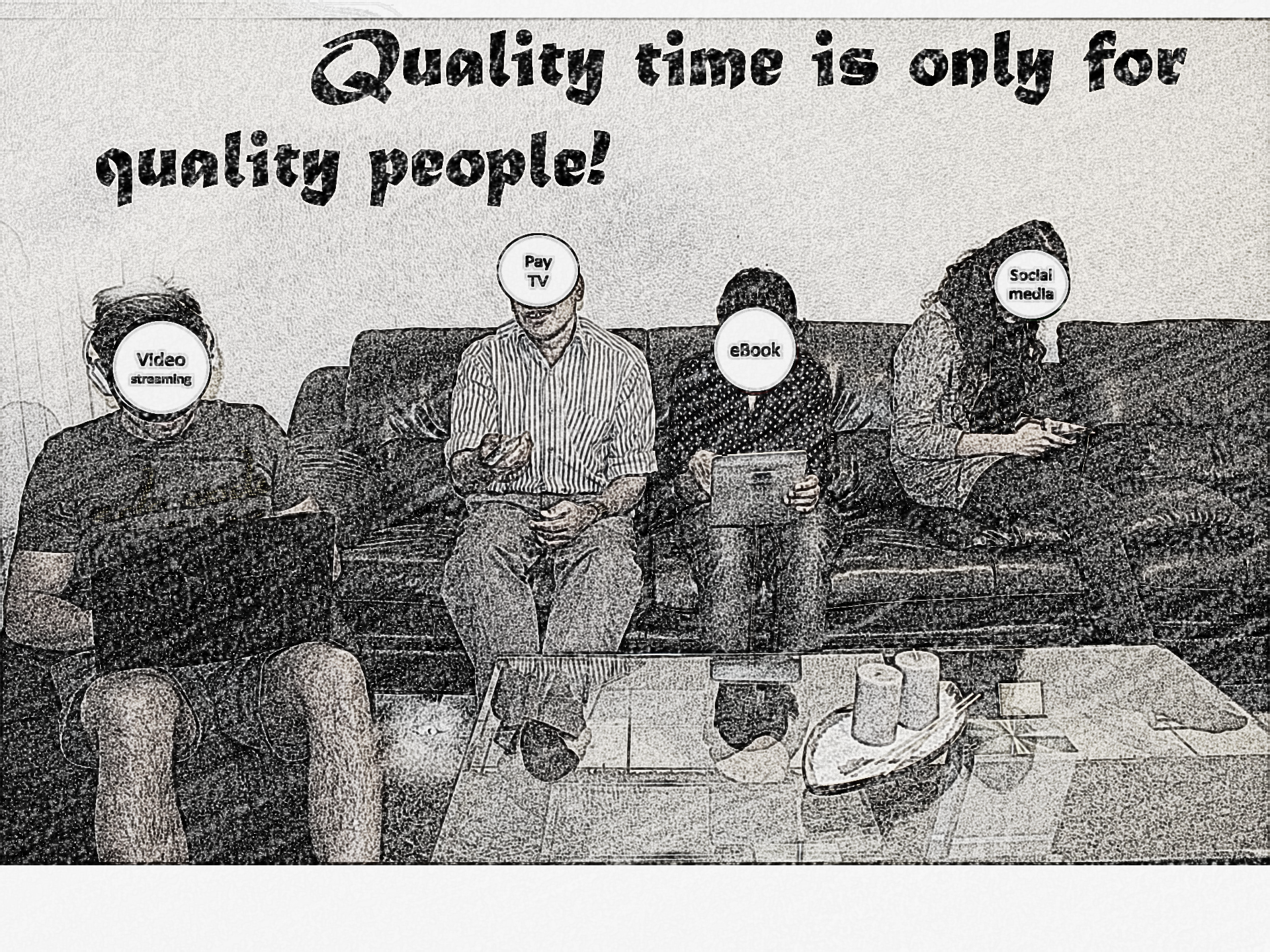 „Staying at home and using internet or other modern devices all the time, being overwhelmed by the massive amount of partially insignificant information, instead of spending quality time with the immediate close ones will be an avoidable misbehaviour one will regret very soon. Spend more quality time with quality people!“

Once there was a mouse living in the hole of an apartment’s corner. In the evening he escaped from his self-made home and ate anything he found in the flat. During his favourite Christmas time the mouse generally looked forward to the massive amount of food available. Changing flats once in a while, this year, he found himself in a small flat belonging to a family of four during Christmas time.

There, money was tight; however they always managed to have a filling dinner together. Unfortunately the food that remained for the mouse was often poor. The mouse realized that the family spent much time together either in front of a big screen where images move or outdoor while they went shopping together carrying baskets full of stuff and bags of clothes from local retailers. During this Christmas they all gave gifts each other. All of them were pretty small items but they were grateful for receiving them.The family talked much: they often laughed sometimes even cried; but also had usual arguments. Electrical devices were rarely used at home whilst they were carried along when they left the apartment.

After a while the mouse decided to change his accommodation and to look for a more prosperous ‘foodier’ house. At night with the help of a random truck he escaped from that apartment successfully being a stowaway.

He jumped off in front of a well decorated house where a huge amount of lighting and a big Christmas tree were placed. Already smelling the delicious food, he entered the house. After he struggled to find a good hole to hide, he identified the house owners; again a four person family. The boy was in front of an electrical device where there a screen and a keyboard could be seen, whilst the girl, sitting on the corner, was typing something on another device, where an apple symbol was placed on the back. The old woman in the house was using another device with an apple symbol, however it was a little longer and wider one, whilst the man was watching on a big screen around 55 inch full of light, where numerous people were moving and talking; an immense sound could be heard resulting from some other black boxes.

The family did not talk much one another. Every one of them was sitting few meters away from each other and lived in his or her own world.  Over the days, regular parcels with clothes and even grocery products were delivered by a brown van. It seemed that they do not go for shopping other than that. Even though everything looked big, shiny, classy and expensive, the atmosphere was not warm as felt by the mouse. However it was a stellar source for food. After a while the mouse was wondering why this family was passing their time day by day individually whilst the previous family lived their life to the greatest extent possible as a unit, expressing literally joie de vivre. Now the mouse had sufficient food, however he felt irritated. The family he lived with was not expressing love which could even be felt by a mere mouse.

He thought about returning to the old dinky tiny apartment, where there was less food but something which made him feel more comfortable, that he was not able to appreciate before. He wanted to return but he did not know the route to the previous home. There was no obvious way back.

4 thoughts on “Do you see the mouse in the image? – Quality time is only for quality people!”